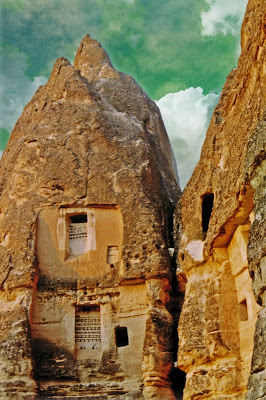 The rock cut ruins of a church by persecuted Christians in the early Middle Ages.

Goreme, an important Christian centre in the early years of the Middle Ages, was a bishopric administered by Mokissos near Aksaray in the 11th and 13th centuries. Despite the vast number of monasteries, churches and chapels in the vicinity of Goreme, there are not many inscriptions bearing dates. For this reason, these religious buildings are mainly dated according to the iconography or architectural features.

It is believed that Goreme and its surroundings were used as a necropolis by the people of Vanessa (Avanos) in the Roman Periods. Both the monumental twin pillared Roman tomb hollowed out into a fairy chimney in the centre of Goreme and the presence of numerous tombs in the vicinity support that idea.

It served as a physical and an intellectual oasis for the people who have lived here. Hittites found refuge from the Phrygian invaders while early Christian monks sought its isolation in a remote corner of the kingdom during the 2nd century Roman persecutions and were later sheltered from the Arab invasions in the 7th and 8th centuries.

The Cappadocia valley became an important center of monasticism that lasted from the 4th to the 14th centuries. There are an estimated 150 churches and several monasteries in the canyon between the villages of Ihlara and Selime.

This website uses cookies to improve your experience while you navigate through the website. Out of these, the cookies that are categorized as necessary are stored on your browser as they are essential for the working of basic functionalities of the website. We also use third-party cookies that help us analyze and understand how you use this website. These cookies will be stored in your browser only with your consent. You also have the option to opt-out of these cookies. But opting out of some of these cookies may affect your browsing experience.
Necessary Siempre activado

Any cookies that may not be particularly necessary for the website to function and is used specifically to collect user personal data via analytics, ads, other embedded contents are termed as non-necessary cookies. It is mandatory to procure user consent prior to running these cookies on your website.